My partner and I are lying in bed. He’s got his arms around me and we are a tangle of limbs beneath the sheets. Then he speaks.
“You’re so soft,” he says.
He says this a lot. He also says things like “you’re so huggable” and “you’re so squeezable”.

I wonder what your reaction was reading those words. Imagine hearing them said to you. How would you feel? What would you hear? I know what my reaction would have been a few years ago. I know that I would have heard “you’re fat”.

The thing is, we listen to what people are saying and then we apply our own filters to the words; filters which have been created from a whole myriad of experiences. That is what our minds do, and when it is someone with an eating disorder, that filter is especially pervasive, vehement, and antagonistic in the most negative of ways when it comes to comments about our bodies. People’s words go through this filter and it gets translated, so that what we hear is not necessarily what was said.

In this instance, I did a little laugh as I realised that his words went through my “ED translator”, and then carried on through my “recovered translator”, meaning that it went through two stages: “you’re so soft” turned into “you’re fat” and then into “he means your skin is soft or maybe he does mean your body is soft and so what Sarah, a lot of it is, and that’s nice, and it is nice to hug soft things that’s fine stop acting like he told you that you look like a naked mole rat that went through a blender.”

Sometimes my partner even puts his hand on my stomach and gently squeezes the squishy bit. Yeah, you can see my face now: 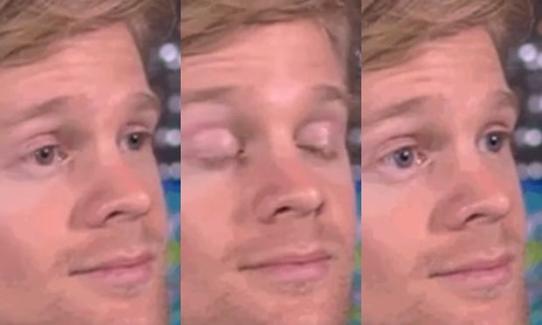 If it was me three years ago I would have had a meltdown and engaged in some drastic and incredibly harmful behaviours, and it would be something I would probably remember forever as a trigger point for self-loathing. However, I am not that person anymore and I am – thankfully – now not in that torturous place. Instead I asked (slightly incredulously):
“Are you squeezing my fat?!” to which he replied: “Yeah, sorry.” Again, three years ago I would have heard that answer as “yes you remind me of a beached whale and I am poking fun at your fatness and reminding you that you should probably do something about it because it is gross.”  But instead the translation that finally came out of my little two-staged system was “You have fat on your body and he squished it because he had his hand there and it is a part of you and it it something that squishes and that’s okay; he still finds you attractive and wants you to be naked 100% of the time.” Because I suffered from an eating disorder for ten years, and because I live in a society that highly values diet culture and thinness, my brain will always automatically put the words through a negative filter. But because I was able to fight tooth and nail for my life and succeed in claiming it back from my powerful and evil mental illness, and because I then went on to reject diet culture and embrace body positivity, I have a wonderful second filter in place that allows me to pause, rationalise, and try to really hear what people are saying when it comes to my body (and everything else).

The important thing in these situations is that the outcome is totally different depending on where your head is at and on your ability to hear what is really being said rather than putting it through your own personal filter. You want to be able to really hear what the speaker of the words means rather than ending up reflecting back your own insecurities as a response. If we hear things through a negative filter of our own, it can then lead to negative situations with that person or people, because we think that they are insulting or hurting us. It also leads to a spiral of negative thoughts and possibly subsequent harmful behaviours. It is important not to hear the words that people say as confirmation of our own insecurities. Your eating disorder is always looking out for ways in which to validate itself. Don’t let it cause distance and destruction towards others or yourself.

If you are struggling with something someone is repeatedly saying, or even a one-off comment that affected you, then talk about it. Be calm; be open; be honest; and try not to use accusatory language. Instead use “I feel” or “my eating disorder hears it like x” as opposed to “you are doing x/you are making me feel x”. People’s defensive barriers go up when they feel that they are being attacked. Often what is being said is actually okay to say and is not intended harmfully, but it is the eating disorder that translates it into something else and then causes harm. Because of this it is more productive to talk about how the eating disorder is at fault rather than them, or you. Of course I am perfectly well aware that there are those who are disrespectful, insensitive, and malicious and do intend to cause damage or do not care enough not to, but I am for now talking about those who we assume are not saying the wrong thing per se, but are saying things that are triggers for the eating disorder, which then rears it’s ugly head and translates for us.

It is not an easy thing to change the patterns within our brains, but it is possible. It takes time, and patience, and perseverance. It takes determination. It takes persistence. It means having to challenge negative thoughts every damn minute of every damn day. It means working towards liking and respecting yourself as a person. It means taking steps towards accepting your body as it is at its individual natural and healthy weight. It means screaming “NO” to the eating disorder and fighting for your health and happiness. It means recognising that the people who love you are not out to hurt you. It means remembering that you might at this point in your life feel hatred towards your body and self-loathing towards who you are, but that that is not how other people feel about you. It means recovery, and it means going on a journey to the place you want to be; to the life you want to live; to being the person that has been suppressed by the eating disorder. It means taking the path that leads to being free.

1 thought on “Are You Listening? How We Hear the Things that People Say About Our Bodies When We Have An Eating Disorder”